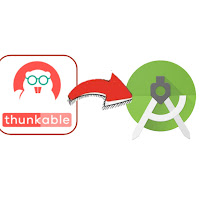 Why leave Thunkable?
Thunkable is primarily a simple Framework which can be used to develop small to average mobile application (IOS & Android apps). It does not support all the functionalities that are present in the Android Studio developed by Google and JetBrains.

Here are some major reasons why android studio in great for building up your application (Android).
Android Studio is the official IDE that Google released to support the development of Android Apps only. Android studio is Freeware plus Source code. It has all the functionalities and tools for creating any kind of App. This the tool which developers and professionals use to create professional-looking Application.
Give the Flexibility to design UI. Involve coding. Make you feel like a developer. Support all features of an IDE as it is just a web service to develop applications.
It is very easy to build apps in Thunkable. In Thunkable Everything is available as blocks All we have to do is just put the blocks together to build the Application for IOS and Android.
There is no coding needed for building apps in Thunkable. While Android Studio is all about coding. Thunkable can be used to create cool apps but they don’t look or seem professional. Thunkable is still using the old design language.
You Maybe Like: Android Studio Most Important Common Questions with Answer
Another main thing that thunkable lacks in debugging functionalities. An app is not perfect until all the imperfections and bugs are fixed. Thunkable doesn’t have any debugging options.
But as my experience says it can not give:-
Does not give the Flexibility to design UI.
Does not involve coding ( i mean you missed all fun)
Does not make you feel like a developer.
Does not support all features of an IDE as it is just a web service to develop applications.
Also read: Remember 4 things before making a Professional Android App
Conclusion
Since Google itself now officially supports Android Studio, So we can be sure there will be sufficient support for the IDE and Plugins and therefore everyone is shifting to Android Studio. So, it has big official support as well as community support, therefore there will be better IDE and Plugins for developing some great Android Apps.

7 thoughts on “Thunkable vs Android Studio | Which is Best for App making?”